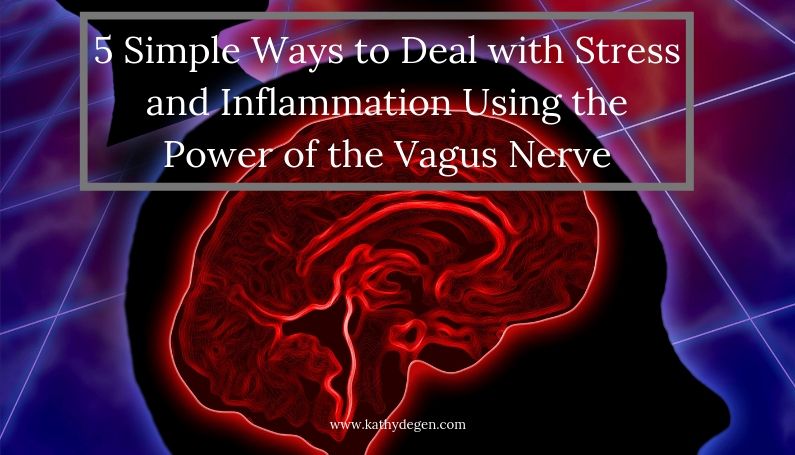 Is it weird to have a favourite nerve? I have to admit, I am a total anatomy and physiology geek. I love simplifying how something works in the body and then trying to elicit it.

The answer is my favourite nerve … The Vagus Nerve.

Whether patients come in with complaints of inflammation, pain, brain fog, digestive problems, mood disorders, or anxiety, the vagus nerve is always in the back of my mind. It is so critical in obtaining optimal health and well being.

Cranial nerves are nerves that start in the brain and go to various parts of the head, neck, and trunk. The Vagus Nerve is the  10th of the 12 cranial nerves and the longest. Vagus is Latin for “wandering” and it is called that because it travels so far. It starts in the brainstem and has input to all the visceral organs.

The vagus nerve exits the head through the jugular foramen which is an aperture at the base of the skull. There are 2 nerves, 2 exits, right and left.  The vagus nerve travels down the neck, along the breast bone, on either side and then pierces the diaphragm to enter the abdomen. It terminates by dividing into branches to supply the esophagus, stomach, small intestine, and part of the large intestine.

The Function of the Vagus Nerve

The vagus nerve has 4 main functions.

More recent research has shown that stimulating the vagus nerve can inhibit the production of cytokines which then results in an anti-inflammatory effect.

In a 2004 University of Virginia study, stimulation of a rat’s vagus nerve resulted in an increase in the neurotransmitter, norepinephrine. The increased norepinephrine was found in the amygdala, the part of the brain that is responsible for strengthening the storage of memory in other parts of the brain. As a result, the higher the vagal tone, the better memory there is which could be helpful in diseases such as Alzheimer’s.

Vagus Nerve and the Heart

Beyond heart rate and blood pressure, another measurement of the health of the heart is something called Heart Rate Variability. This is the measurement of variability between heartbeats. A normal heartbeat is not like a metronome, meaning it does NOT tick evenly. The healthier a heart is, the more variability there is between heartbeats. This may not be something you are aware of. The gold standard of measuring HRV is using an electrocardiogram (ECG).

The HRV is an indicator of how well you are able to handle stress and how resilient your heart is to the effects of stress. A decrease in HRV may cause both mental and physical problems. Chronic stress is a contributor to a decrease in HRV.

Although the mechanism is still unclear, research has shown that stimulation of the vagus nerve increases HRV which then helps the body deal with the effect of stress and the health of the heart.

The vagus nerve is responsible for the movement of food through the digestive system. As well, it plays a role in the production of digestive juices. Any issues with digestion, GERD, bloating, pain, bowel movements may be a result of the vagus nerve.

Vagus Nerve is the Mind-Body Connection

We have all heard of the term ‘gut feeling’. The vagus nerve is the modulator of this connection. Remember, the vagus nerve goes from the brain to all the major visceral organs. Studies have also shown that increased vagal tone allows for more closeness, connection, and altruistic behaviour.

A very interesting study has shown vagal tone is passed on between mother and fetus. Mothers who are depressed, anxious and angry during their pregnancy have lower vagal activity. The newborn baby, however, then displays low vagal activity with associated lower dopamine and serotonin levels. 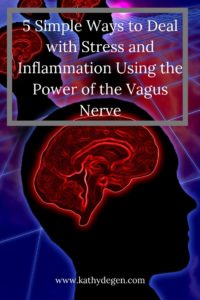 How To Improve the Vagus Nerve

For a while now, there have been many studies using electrical stimulation of the vagus nerve in subjects with epilepsy or depression. Many of the effects of this stimulation show the effects as discussed above. Obviously, as health care practitioners or yoga teachers, we would not be electrically stimulating the vagus nerve for its beneficial effects. Luckily, we don’t need to! Here are 8 ways we can help our clients or students to help themselves stimulate this all-important nerve.

When I am working with my patients, I will often work on things to increase mobility in the thoracic spine. I give them things to do to improve the range of motion, to improve expansion and to improve movement of the diaphragm itself.

One of the most powerful factors affecting HRV is our feelings and emotions. Emotions such as anger, frustration, sadness, and anxiety make the waveform of the HRV very jagged and uneven. This is called an incoherent heart rhythm pattern. On the contrary, emotions such as gratitude, compassion, joy, love, and appreciation make the HRV much more coherent.

HeartMath is an organization dedicated to the research of HRV coherence. It has been around for over 25 years and has studied over 11 000 subjects. They have developed tools to provide biofeedback on the coherence of HRV.

In my office, I will use the portable biofeedback tool and teach patients to generate positive emotions to get a response on the biofeedback which will let them know if their HRV is coherent or not. Over time, they learn to generate these emotions in times of stress or negativity and will generally feel better in a very short period of time.

In Osteopathy, there is a technique we use called suboccipital decompression where we are creating more space between the head and the neck. After this technique, inevitably, patients will report feeling more relaxed or even drift off in a relaxed state. Although purely anecdotal at this point, there are studies underway to measure the effects of this technique on the vagus nerve and resultant changes in neurotransmitters and inflammatory proteins.

As the vagus nerve travels down the neck, it stands to reason that restrictions and tightness in the neck will affect the nerve. Many of our issues experienced in the neck are a result of poor posture and poor alignment of the rest of the spine. Our necks are often tight because of our sedentary lifestyle and the amount of time we are sitting plus the terrible positions of our neck in working on the computer and texting.

Many studies have shown exercise helps to improve mood disorders and other health problems. However, a 2010 study shows that the effects of Yoga on mood, anxiety, and depression was even greater than just physical activity. Note that this study looked specifically on a 12 week Iyengar Yoga which focuses on alignment, posture, holding poses, and breathing.

Singing, humming, and chanting creates an increase in HRV and vagus function. It also produces more oxytocin, the feel good hormone. When I do my yoga practice or teach classes, I insist on chanting at least ‘Om’ so students become aware of the effects of chanting. I will often put on chanting in my car when I am driving to get more of a relaxation response during long commutes.

The effects of the vagus nerve cannot be overlooked when dealing with stress, emotions, digestive issues, or any unexplained symptoms. We all intuitively know that stress plays a critical part in creating disease and problems within the body. Increasing vagal tone should be a part of the toolbox in combatting the effects of stress. To improve vagal tone takes no time, no equipment, and can easily be incorporated throughout the day.

Next time you find yourself in a stressful situation, or having issues with pain and inflammation, try one of these simple techniques, feel the relaxation response and know that you’re strengthening your vagus nerve!

You have Successfully Subscribed!

Book An Appointment or Class

Subscribe to our newsletter for tips, tricks, advice and the latest updates from our clinic.

You have Successfully Subscribed!